Buckle Your Seatbelts – Volatility is Back

The stock market had its first taste of volatility this year on June 20 when Ben Bernanke, Federal Reserve Chairman, stated that the Federal Reserve (Fed) will pull back quantitative easing (QE) by tapering its government bond purchasing program. This took the market by surprise because investors anticipated the Fed would continue to spur the economy through the end of 2013 and possibly into 2014. The purpose of QE is to keep interest rates low, encouraging businesses to borrow and grow. Consequently, the reactions to Bernanke’s comments were immediate. The Dow and S&P dropped 2.3 and 2.5 percent, respectively, for the day, which resulted in the largest one-day declines since November 2011.  Subsequently, interest rates on the 10-year treasury rose 0.13 percent, hurting bond investors, and commodities, including gold and oil, also dropped.

What Does All of the Volatility Mean?

Think of QE as medicine to a healing economy – the stronger the economy gets, the less it needs QE medicine. The Fed’s opinion is that the economy is ready to start growing on its own, without continued intervention. Additionally, the Fed has identified milestones for the future which it believes will be indicative of the economy’s posture for growth. Earlier in 2013, Bernanke explained that the Fed would probably not consider raising interest rates until unemployment reached 6.5 percent, yet it is currently 7.6 percent. In his book Nudge, behavioral economist Richard Thaler comments in a section about investment gains and losses that “losing something makes you twice as miserable as gaining the same thing makes you happy.”  As such, the two recent bear markets have left investors very sensitive to market pullbacks. 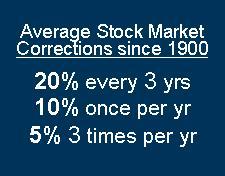 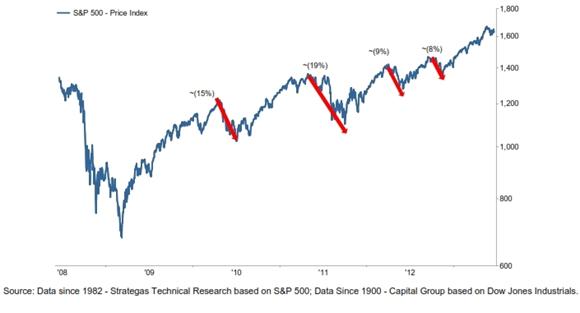 What to do about it?

Volatility can be muted by diversification among assets classes, rebalancing, and owning passive stock funds. In the last few years, we have implemented passive index funds in our portfolios to help reduce overall cost and spread out risk by owning more stocks. Above all, we advise our clients to be patient during volatile periods because history shows that patience pays off.

Interest Rates: What Goes Down Must Come Up

The bull market in US bonds began on September 30, 1981 when the 10-year treasury yield peaked at 15.84 percent, and it most likely came to an end on July 25, 2012 when the yield dropped to 1.43 percent.  Since the low point of last summer, the yield has increased to 2.62 percent, an 83 percent rise. During the 30-year bull market, bond investors enjoyed unprecedented positive performance in bonds because they were the beneficiaries of declining interest rates. Declining rates are a bond investor’s tailwind, while rising rates are a bond investor’s headwind.
Therefore, history dictates that the key to protecting yourself from rising interest rates is to understand the risk associated with a bond portfolio. One way of measuring this risk is to determine a bond portfolio’s duration, which measures the sensitivity of the portfolio to a change in interest rates. Duration is expressed in years and is determined by the collective maturities of bonds in the portfolio.

The longer the maturity of the bonds you invest in, the more volatility you will experience as interest rates move. Consequently, you want to keep maturities at a level that will give you the greatest opportunity for return while controlling the risk of rising interest rates. If a bond portfolio has a duration of three years and rates rise one percent, then an investor could expect to see the price of their bond portfolio fall by three percent. At The Trust Company, we are maintaining a portfolio duration of just over three years in our bond portfolios (much lower than our historical duration target).

How The Trust Company Responds

We feel that The Trust Company utilizes some of the best bond managers in the world, and we structure them within portfolios in a way to maximize their synergies and help protect against interest rate risk.  PIMCO, managed by Bill Gross, is the largest bond advisor in the world. Over the years, Gross has outperformed his peers through a unique perspective of the world financial markets. Metropolitan West is a complementary manager to PIMCO that concentrates on finding undervalued bonds that will appreciate in the future. Templeton Global Bond, our international bond manager, finds bonds in countries with strong currencies and stable growth. The combination of these managers provides diversification through the types of bonds they buy and their unique investing processes; therefore, we are confident that we have the resources in place to weather the coming storms as interest rates rise.

You will note that we use a number of Vanguard index funds. Vanguard decided to change the indexes they were tracking in order to reduce their licensing fees and to increase their holdings in some funds. Vanguard is owned by its fund owners so a reduction in expense directly impacts investment returns in a positive way. For the domestic funds, they will be utilizing indexes that are designed by the University of Chicago’s Center for Research in Security Prices (CRSP). International funds will refer to the Financial Times Stock Exchange (FTSE). We see this as a positive change for Vanguard and our clients.